The One Little Guest Blog That Lit My Business On Fire

Appearing as a guest writer on someone else’s blog wasn’t something I took that seriously until a recent successful guest posting blew up my business. Here are the steps I took to get surprisingly viral results. 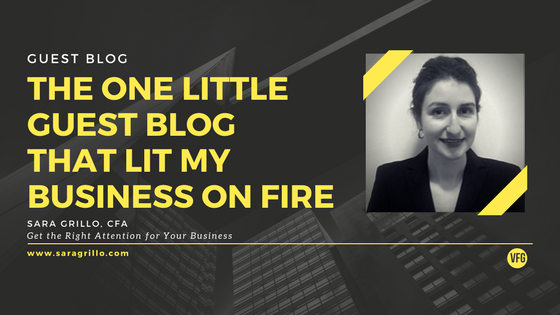 One of the reasons I had never guest blogged much in the past was a lack of access to publications which I felt would be relevant to my business. As owner of a financial marketing agency, I always thought that the subscriber base of the Wall Street Journal or Financial Times was the audience I needed to get in front of, yet I had no real connections there. I decided to give a less broadly known publication a try, an online website called efinancial careers. The idea dawned on me when searching through my LinkedIn contacts for anyone I was connected to with the title “editor.” This wasn’t a direct hit as I imagined that many of the readers would be on the site for the purpose of finding a job in finance rather than being in leadership positions at companies that would potentially hire me as a marketing consultant. Nonetheless, they were financial professionals. What would be the harm in trying? The website had great domain authority and a good amount of viewership.

Although the theme of financial career searches wouldn’t directly promote my profession as a financial marketer, I did have a story to tell that would be highly relevant to the investment management community I was targeting:  the story of how I become a CFA charterholder and how it helped me rise in the ranks of Wall Street.  I saw a white space in the universe as there wasn’t much already published on this. Plus, I had a unique spin because unlike most who hold the designation I was able to pass the exam with a liberal arts background while most people come from finance or economics. Though it wouldn’t showcase my financial marketing expertise per se, I knew my angle was intriguing enough to be a hit. Plus, the article byline would point directly to my website and if I stirred up enough curiosity about myself then people would naturally click on the link and learn about my business.

I didn’t want to be one of those guest bloggers who spend a great deal of time, give away their intellectual capital for free, and don’t get any real benefit from the experience. I really dug down and made sure that the results were going to be worth the effort. First I research what other people had written on the site so that I could be sure to stand out. I noticed what the successful ones did, and made sure to do it better. Here are some examples of what I mean. I crafted the tale as a first person narrative to make it more relatable. I drew the reader in by describing real events rather than speaking in generalities, for example, explaining how I was studying so hard that I didn’t even notice the heat in the building went off one winter evening until my hands went numb. I made it easy for people to connect with the experience. Most writers shy away from using a less formal tone, using passive voice, etc. I’ve found that with so much content being published every second on social media, there’s not much of an audience for lofty, aloof tones. You’ve got to appeal to people’s emotions in the world of online media. If you aren’t an experience enough writer to get into a well read publication and put together something compelling on your own, I would suggest hiring a professional ghost writer who knows the science of how to message the content.

When the article was published, it drew a great deal of attention to my website (through the byline, as I had expected). I had made sure that my biography page included a hyperlink to my LinkedIn profile so that I could harness all the attention I was getting and leverage it into long term contacts. A myriad of connection requests came in through my social media, from a Managing Director at Morgan Stanley to numerous Chief Investment Officers at investment firms and a fair amount of analysts. I converted these into business opportunities by asking each one a personalized question such as “I see you’re in charge of an investment firm here in New York. What did you find to be of most interest about my CFA story?” The best way to get someone to open up to you is by asking a non-intrusive question about what they are trying to achieve as it relates to the reason that they initially contacted you. I did this over and over again and in no time it created enough leads to blow up my sales funnel.

I wasn’t going to stop there, though; there were so many other ways I was going to repurpose the guest blog to blow up my business. I backlinked the article to my website to increase my credibility as a writer. I sent out a newsletter to an email list that was specifically segmented to this target base with a promotional call to action. Once I got the newsletter results, I analyzed everyone who opened it and sent each person who clicked a personalized follow up email. Lastly, I made a YouTube video summarizing the article and included the link in the description field. Video content is more engaging by multiples and can greatly improve Google results for a specific keyword.

In the future, I plan to include this article as “evergreen” content and post anytime there is an event in the investment community, such as the four times a year that CFA results are released. I’ll continue to share the link into social media groups and ask micro-influencers that I come across to share it with their digital networks.

Summary: How To Successfully Guest Blog

The success of my guest post surprised me and I can attribute this to three major factors: choosing a popular website where your message will both suit and intrigue the target audience, writing the content in a highly relevant way that cites specific examples, and leveraging multiple follow up marketing strategies after publication to retain top of mindedness with those whose attention you managed to catch.

If you're interested in guest blogging but don't have the bandwidth to produce a blog yourself, contact Sara for some ideas!